“Europe’s economic slowdown was abrupt, deeply painful and still has no end in sight. 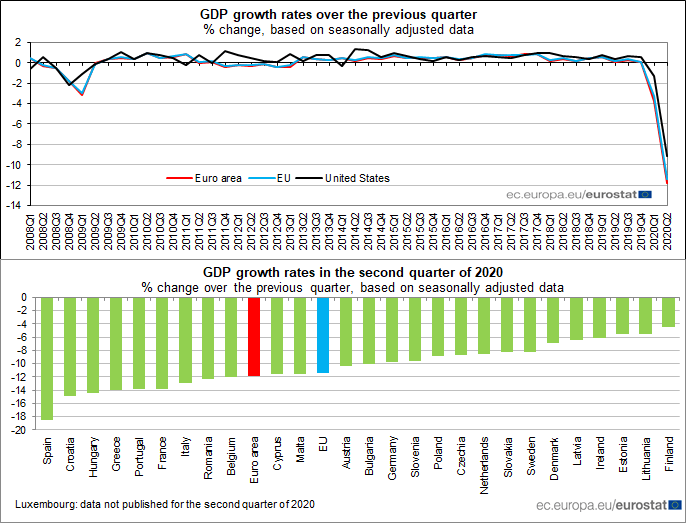 “It’s a testament to how punchdrunk the markets have become that GDP figures which would once have seemed catastrophic now pass for mundane.

“Europe’s economic slowdown was abrupt, deeply painful and still has no end in sight.

“Eurozone output in the second quarter of 2020 was 14.7% down on what it was at the same time last year. By contrast America’s year-on-year decline was a little less brutal, at ‘just’ 9.1%.

“When the European Central Bank’s grandees meet this week to agree monetary policy, they will face an almost unsolvable quandary.

“With the Eurozone economy holed below the waterline and the bloc even slipping into deflation in August, by rights the ECB should be cranking up its money-printing operation in an effort to jumpstart consumer demand.

“But there are two big problems. Firstly, with interest rates already deep in negative territory and the European monetary stimulus bazooka still smoking, the ECB has already used up most of its arsenal.

“Secondly, falling prices now pose an insidious threat – as they lead consumers to defer purchases in the hope of securing a discount in future. With unemployment rising fast, any hope that Europeans might spend their way back to economic health is fading.

“As the Covid infection rate creeps back up across the continent and the Eurozone economy remains in intensive care, the ECB’s monetary medicine cabinet is looking alarmingly bare.”